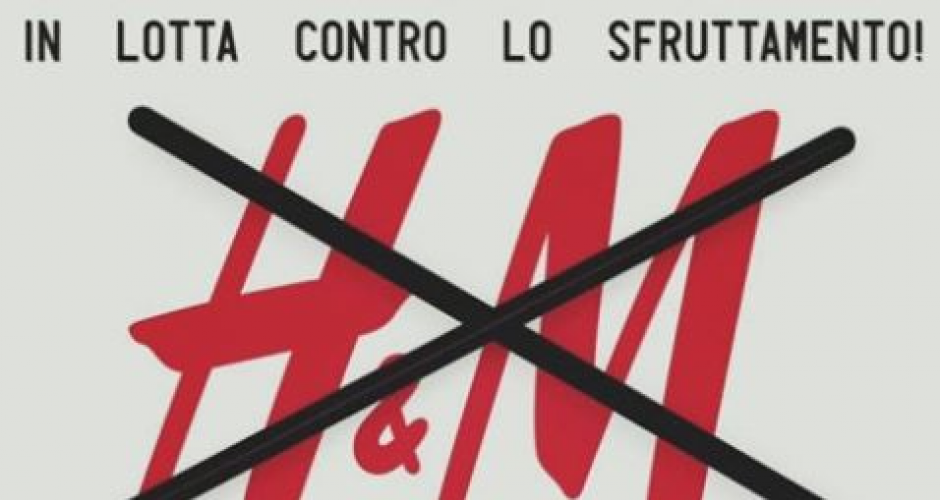 Dear Comrades of the International Trade Union Network of Solidarity and Struggle,

in these days of August, a month in which most Italian workers are on holiday, workers of the H&M warehouses in Stradella and Casalpusterlengo (both in Lombardy, Italy) are carrying out their first, important struggle for their rights and working conditions after organizing with SI Cobas. H&M, a Swedish multinational in the clothing retail business, outsources its manufacturing to low-wage countries, especially Bangladesh, where it is the largest buyer and textile workers’ wages are lower than 100 dollars a month. There, even before the 2013 collapse of the Rana Plaza factory building where 1,128 textile workers died and more than 2500 were injured, in March 2010 21 workers of Garib & Garib, a H&M supplier, died in a factory fire, and in February 2016 another factory of the Matrix company, a supplier to H&M took fire, despite an agreement signed by the main buyers to increase workplace safety.

Exploitation starts in the factories but continues in the warehouses where the logistics of clothing is managed. The Stradella warehouse, with about 300 workers, most of them women, is one of the main distribution hubs in Europe for the Swedish clothing giant, from which clothes are sent directly to houses through on-line shopping in different countries in Europe. It is managed by XPO, a logistics multinational, which contracts the work out to a so-called “cooperative”, which hires workers with part-time contracts but they have to work eleven hours a day for six days a week. Their work time schedules are communicated every day for the following day: they cannot plan their lives. Wages are the lowest possible for logistic workers (6J level) and since they are “part-time” they receive curtailed pay for holidays and for the two extra monthly wages in June and December. Their demand is to work normal 39-hour work weeks, have a full time contract, have a monthly work time schedule, and have a pay level adequate to their jobs. H&M-XPO and the cooperative also refuse recognition of SI Cobas.

The workers in Stradella have started their third strike in a month last Friday August 19, with picket lines to convince fellow workers and truck drivers not to trespass. Yesterday (Tuesday, August 23) XPO has locked out workers in an attempt to break the strike. Part of the picketing workers, having learned that the work had been diverted to another warehouse, have picketed its entrance yesterday.

In Casalpusterlengo H&M was managing its warehouse (from which clothes are delivered to shops), directly so it is the direct employer of workers. But observing the national labour agreement seems too expensive to this multinational, so it wants to compel 15 workers to resign in order to be hired by another “cooperative”, which would dodge more easily its obligations under the national labour agreement and apply the new Jobs Act, which means almost free dismissals. Official trade unions (CGIL, CISL and UIL) have proposed a golden handshake in change for their dismissals – and hiring new workers under worsened conditions. The workers have started a strike there too, supported on the picket line by workers from Stradella.

Even though H&M in its corporate communication is pretending to observe social values, it simply dodges them by contracting and sub-contracting out the work on which it makes money, both in manufacturing and logistics. As H&M only understands the language of profit, SI Cobas is organizing a boycott of all H&M shops starting Saturday August 27 in the main cities of Italy, and call sister unions and organizations to organize boycotts in Europe and elsewhere.

For the SI Cobas Executive Committee