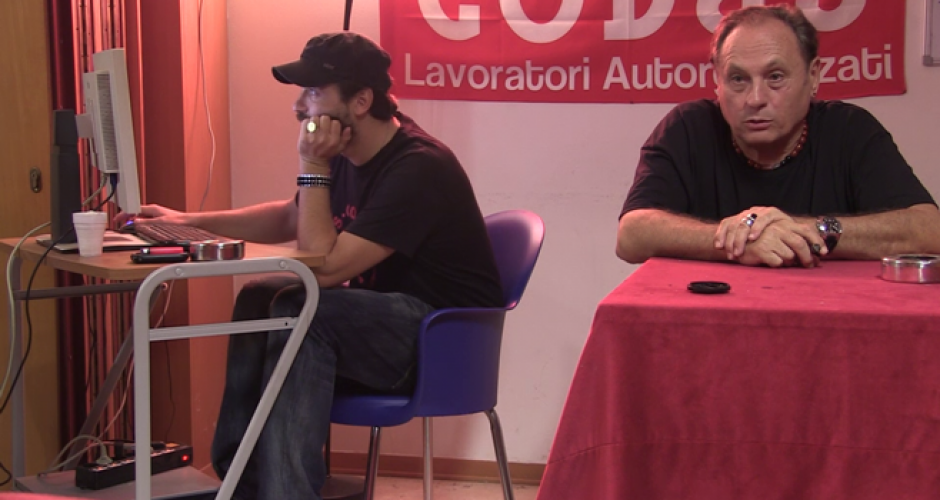 Aldo Milani, the national coordinator of SI Cobas, an Italian militant trade union, has been arrested on Thursday January 27 under the charge of extortion at the expense of the Levoni Group of companies, one of the biggest slaughtering and meat processing companies of Modena, Italy. This is part of a plot to smear our and other militant unions and attack the right to strike. The plot is being unmasked after Aldo’s liberation, but only the extension of workers’ struggles can defeat this attack by the bourgeoisie.

The story: neither the sacking of hundreds of its striking rank-and-file workers, nor police batons against pickets, nor legal charges and trials against workers and activists, criminalizing pickets, have been able to stop the expansion of the organization of workers and strikes in the logistics sector by SI Cobas and ADL Cobas. Nor have the bosses been more successful in trying the most tested means – corruption – that usually works with mainstream unions. CGIL, CISL and UIL.

In the last year SI Cobas has started organizing workers in the meat district of Modena (the main in Europe) where mostly immigrant workers work in even worse working conditions than logistics workers, worse than those in Chicago’s slaughterhouses of the early 20th century.

55 SI Cobas members have been sacked after a strike in the Levoni group. SI Cobas has waged a number of strikes in Levoni plants to have workers hired back and for payment of unpaid unemployment contributions, without which they can’t even obtain unemployment benefits. SI Cobas has also sued the Levoni group for almost one million euros for wages due, contributions and personal damages.

In a Bellentani plant (which is part of the Citterio group) SI Cobas has reached an agreement that strongly improves wages and conditions, with the application of the food industry national agreement, which means an almost 40% wage increase.

In order to break the strikes and avoid "contagion" from this agreement, the Levoni bosses – knowing they could not buy SI Cobas and tame it as the official unions that have closed both eyes for decades – have schemed a plot to demolish the reputation of SI Cobas: they have accepted to negotiate its demands through the assistance of an intermediary (who belongs to the underworld of the bosses of the so-called "cooperatives" and after spending 18 months in detention for tax fraud, is also working as a consultant for the Levoni Group and is in other business relations with it ). They have called a sudden negotiating table for Jan. 27 and arranged for the police to place cameras and film one of the bosses handing out an envelope to the intermediary while Aldo is talking to the other boss. The envelope contained 5.000 euros, which the police duly found after they left the hall, and arrested both the man and Aldo for "extortion". The accusation: he had asked 90,000 euros to avoid further strikes...  The video, released by the police, went viral on social and  tv channels.

The real issue at the negotiating table was hiring back the sacked workers, and the payment of unemployment contributions. It has still to be cleared whether the intermediary had asked the € 90,000 boasting that he could moderate SI Cobas struggles, or as the price to take part in the trap (in the film, released by the police as a "proof", after taking the envelope he crosses his wrists twice mimicking handcuffs).

All newspapers, TV channels and social media have spread the “news”: TWO SI Cobas leaders arrested for asking bribes to sell out workers, etc. Millions of people have seen the police film and heard this interpretation. Even the day after, when it was cleared that the man who took the money was linked to the Levoni Group, not to SI Cobas, newspaper headlines still red “Two SI Cobas arrested”.

Even though there is no evidence that Aldo Milani had anything to do with the content of that envelope, and the money previously received by the mediator has been registered on his account, the message conveyed by the media is that SI Cobas uses workers’ struggles in order to extort money for stopping the struggle. This attack is even more dangerous than police batons and teargas (used last week to dissolve the last picket at Levoni’s Alcar 1), or criminal charges against strike pickets, because it is aimed at destroying the image of SI Cobas’s moral integrity and the meaning of workers struggles, allegedly waged to enrich union officials, avoiding to mention the sea change in workers’ conditions in warehouses where workers organized with SI Cobas or ADL Cobas (an allied union) have raised their heads in struggle. As Goebbels taught, lies repeated a number of times become truth in mass perception.

This trick has not worked with SI Cobas workers: as the news of Aldo arrest spread, in dozens of warehouses workers have spontaneously stopped work in Milan, Piacenza, Turin, Ancona, Rome and other areas; the Interporto of Bolgona, with hundreds of warehouses, has been blocked  and also workers organized with ADL Cobas struck in the Veneto region. A demonstration was held on Friday at the gates of the Modena jail, and resumed on Saturday, for Aldo’s liberation.

Even though there is no evidence whatsoever of any involvement of Aldo with the mediator’s request for money (this fact would become clear if the police releases the audio content of its video), the Judge let Aldo Milani out of jail, but with the provision that he does not exit the municipality of Milan, where he is resident, and communicates to the police any movement outside his home. Accusations have not been lifted.

The attack on SI Cobas is an attack against militant trade unionism in Italy and against the right to strike and pickets blocking the transport of materials and products.

SI Cobas will wage a counter-campaign to belie the media, unmask the plot of forged accusations and spread the truth, but most of all it is going to continue its organization of workers’ struggles, meat district included, so that the attack received boomerangs against those who have waged it.