Call for Solidarity for Jasic Workers 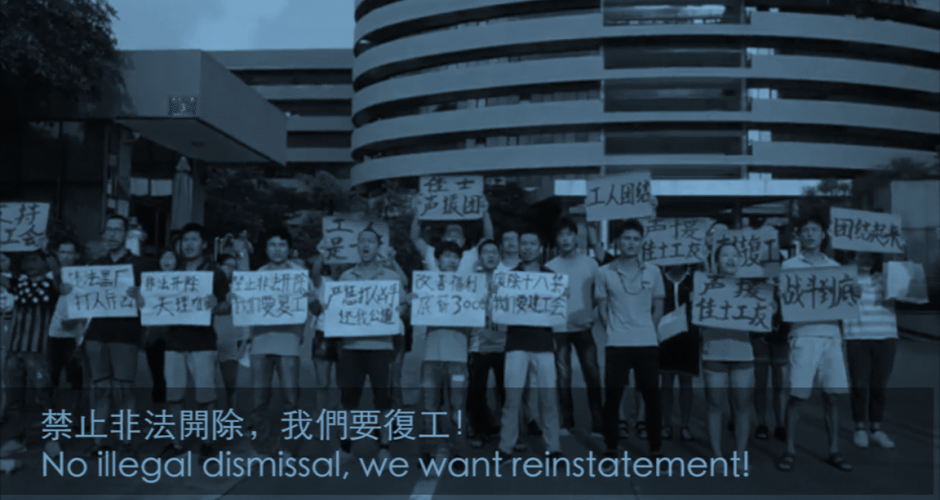 Call for Solidarity for Jasic Workers

You may have heard that there has been a major strike and then supporting protest in Shenzhen in the last month. I'm writing because it's important that the authorities are under pressure to free the arrested workers and disappeared students as soon as possible, and the support organizers here are calling for more international support.

There are 14 workers still in detention and two students who have been disappeared.

The strike that launched all of this occurred at Jasic Technology, a machine parts factory, where workers were trying to organize a union and were fired and beaten by thugs for it. When later workers were arrested for just trying to go to work as usual, a bunch of local worker and student activists came out to support, and were also arrested for
demanding folks' release at the police station. They were released once and then re-arrested when they tried to go to the factory for a second protest against unfair firings. A total of 30 (29 workers and one student supporter) were arrested. After over half a month of protest 16 have now been released, but 14, including a nursing mother with a five month old baby and her husband, are still being held in detention. Two student activists have also been disappeared by police, their whereabouts unknown.
I'm linking a couple of reports on the issue here, but they mostly frame this as a Maoist thing whereas really it was worker and student activists with different lefty leanings in the beginning. The old Utopia Maoists came out later in response to calls for support. They've been important to preventing the whole thing from being cracked down on more brutally because they lend a certain degree of legitimacy. It looks pretty awful to lock up your own retired cadre while they're on the street holding portraits of Mao.

labournet.tv published a video (with subtitles) about this a few days ago:
https://en.labournet.tv/jasic-factory-workers-imprisoned-china

For those of you who read Chinese, a lot of material can be found here: shidaixianfeng.tk, zhichigongyou01.github.io

I'm wondering whether anyone here would be able to organize some kind of supporting protest. The organizers are now calling for international support against the abuse workers and activists have faced at the hands of police, and of course also the ridiculous treatment of the workers trying to legitimately form a union at the hands of the company and the official trade union. Petitions are useful, and have already been issued by global professors and global trade unions in support, but I think a protest at the Cn Embassy or one of Jasic's global branches would be much more powerful. Does this sound like a possibility? There may already be some plans in the US West, but Jasic has customers around the world.

Another, smaller type of support was launch by labournet.de in Germany. They are regularly reporting about this case and wrote a draft email inviting people to use their draft and send it to the Ch. Embassy. The Jiasic subsidiary in Germany is Elkraft. What are the names of other subsidiaries in other countries?

Please let me know if you think any kind of action is possible where you are!

And feel free to discuss or ask questions in this thread.

PS: To get in touch, just send an email to info at labournet.tv