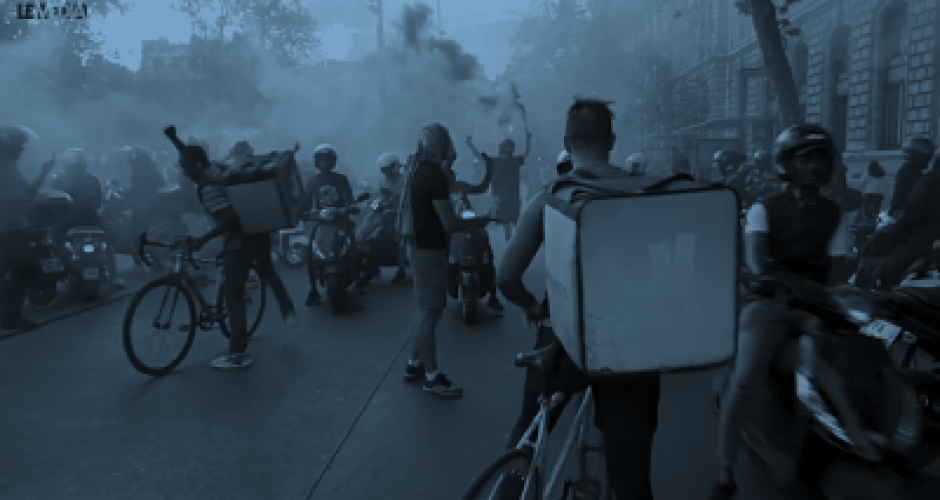 We all knew that Deliveroo did not give a damn about its riders, but this we did not expect, at least not so quickly and so brutally:

- in France, it removed from one day to the next the minimum fee it used to pay for any delivery, meaning a loss in pay for most riders of between 30% and 50%.

- in Germany, it announced unexpectedly on Monday 12 August that it decided to close all operations on the following Friday, meaning all its riders lost their jobs within one week. Deliveroo riders received a letter offering a (very minimal) "goodwill payment" on the condition that they would sign a letter stating that "all claims arising from and in connection with the contractual relationship are settled".

How to fight back under such conditions?

In France riders are organising strikes and restaurant blockades against the new payment system, while in Germany riders are coming together to discuss bringing the company to court to challenge their self-employed status and win compensation. Others in Germany are discussing founding a cooperative as an alternative to the Deliveroo model.

For the 19th edition of Cinéma Klassenkampf, labournet.tv will show videos about the new situation of Deliveroo riders in France and Germany, and will invite riders and their supporters to discuss what's next. We will also hear first-hand from an ex-Deliveroo rider from Spain about the delivery cooperative he founded with his colleagues, and about his experience taking Deliveroo to court.

Riders who just lost their job should not feel isolated. Join us to discuss ideas, get informed and organise support!