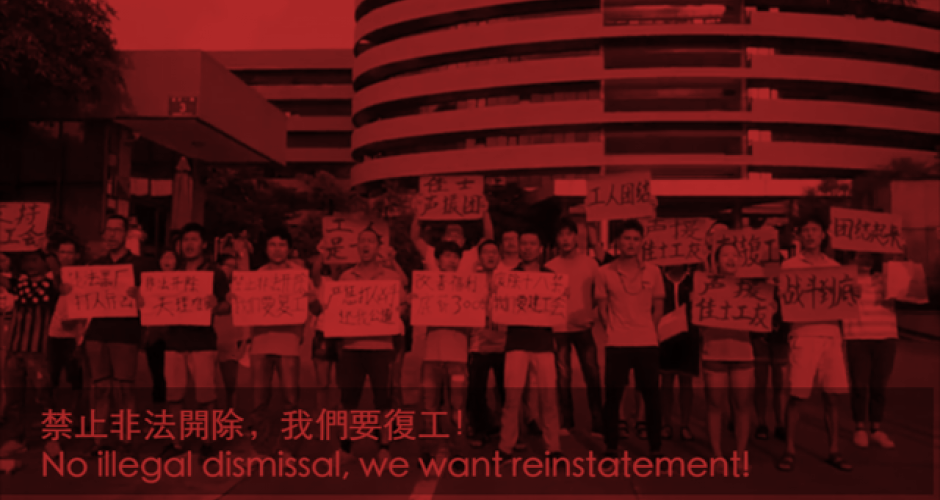 The Jasic workers campaign is one of the most prominent labor struggles in China seen in recent years. Jasic factory workers and supporters have been facing extreme repression since July 2018 when 89 workers attempted to form a representative union in a Jasic welding machine factory in Shenzen, in Southern China.

Jasic Technology is a Chinese corporation which primarily manufactures and sells welding machines. In mid July 2018 protestors outside the Jasic machinery factory in Shenzhen demanded to be reinstated, after seven workers were fired for exercising their right to form a trade union.

On July 20th, 2018 several workers were beaten by the police and arrested. In this first video we see the speech of Jasic worker Yu in front of police the station on July 26, 2018 in Shenzen.

One day later Yu is arrested together with 28 others. After his release on the same day he was kidnapped and deported to his home city. Later he came back to Shenzen be again part of the support group for Jasic workers.

Crowds of supporters bravely continued to protest outside the police station, demanding the release of colleagues who were still in jail. Thousands of university students signed an open letter in support of the Jasic workers’ struggle.

One of the key labour activists supporting the workers is Shen Mengyu, who we see in the following video making a speech outside of the factory. She was previously an elected worker representative in a factory which made car parts for Honda in Guangzhou, but was fired for her union activity. She then became a key advocate for the Jasic workers.

On Saturday 11th August Mengyu was forced into a car and abducted by three unidentified men. Two student activists who witnessed the abduction went to the police, but they ignored important parts of their statement. Several other activists and students supporting the Jasic workers such as Yue Xin have also been abducted.

In January 2019  a staged “confession video" with Shen Mengyu and other abducted student activists appeared where they were forced to announce that their actions were illegal. Their whereabouts are still unknown.

In the night from 23 to 24 August 2018 50 members of the “Jasic Worker Support Group” were raided and incarcerated. The video below captures the moment their living quarters were broken into.

Recently they have put the word out that in the next few days they want to violently clear us out, violently defeat all of us. Will we be defeated by them? - No!

The Jasic workers sent out an international call for support, for people to organise protests around the world to raise awareness of their situation.

On August 28, 2018,  labournet.tv organised a protest of around 30 people outside the Chinese Embassy in Berlin to ask for the release of 14 arrested workers of Jasic factory in Shenzhen and their supporters who are still in detention.

Solidarity messages from workers of Daimler factory in Sindelfingen, and VW in Hannover, both Germany, were read out.

Protest in front of Chinese Embassy in Berlin / 6 min / more >>

The struggle at the Jasic factory faced particularly strong repression because workers made political and not just economic demands, as they are asking to be represented by a union which is invalid in the eyes of the All China Confederation of Trade Unions (ACFTU), and because it received so much public support.

Of the several dozen people arrested four Jasic workers had charges pressed against them for “disturbing social order”. They have been held in detention for several months and denied access to their lawyers as they await trial.

Over the following months many others have been detained or have gone missing. See here for the list of people still missing, detained or arrested in relation to the Jasic Incident (updated as of Feb 18, 2019)