Worker and single mother Norma Rae conducts a unhappy life in small city and works in a textile mill, where the conditions, safety standards and pay are sweat shop like. When she meets unionist Reuben, she turns into a militant union activist.

Norma Rae portraits the american union activist Crystal Lee Jordan, worker at the textile mill J.P. Stevens in North Carolina, who fought for a labour agreement for 10 years. On occasion of Crystal Lee Jordans death in september 2009, the american online magazin Counterpunch beautifully writes about her life and struggle:

"When you consider the Deep South’s history of anti-unionism (to this day, North Carolina, Sutton’s home state, still has the nation’s lowest ratio of union workers, with 3.5 percent), the odds facing this woman were staggering. Ostracized by both hourly and salaried employees, and made the target of taunts, ridicule, insults and even death threats, Sutton nevertheless persisted, holding rallies, disseminating union literature, urging her fellow workers to join up.
She failed.  Although many of the mill’s workers were sympathetic to her cause, they were simply too frightened—too fearful of losing their jobs—to throw in with her. The company openly gloated at the lack of support. Then, in retaliation for her union activities, J.P. Stevens abruptly fired Sutton and ordered her to leave the premises. They were done with her.  She’d not only been defeated, she’d been disgraced.
But, incredibly, Sutton refused to leave the building. She wouldn’t budge. Uncertain of what to do next, the company called in the police to have her forcibly removed from the mill. But before they arrived Sutton wrote the word “UNION” on a placard, stood atop her work table and held the sign above her head. The spontaneous act was an astonishing show of defiance.
What happened next was memorably depicted in the award-winning 1979 film, “Norma Rae” (with Sally Field playing Sutton). The scene still brings chills to anyone who’s ever rooted for the little guy or ever dreamed of defying authority with a dramatic and heroic gesture. As Sutton held the sign over her head and slowly turned so all could see it, one by one, her fellow employees, inspired by her courage, began shutting off their machines.
One by one, and in absolute defiance of company policy—indeed, shutting down equipment without permission was (and still is) grounds for immediate termination—the entire operation came to a halt. As Sutton later recounted in an interview: “The workers started cutting their machines and giving me the victory sign. All of a sudden the plant was dead quiet.”
It had a happy ending. Less than a year later, Amalgamated Clothing won the right to represent approximately 3,000 employees at seven textile plants in Roanoke Rapids, including the virulently anti-union J. P. Stevens, which was then the second-largest textile manufacturer in the country. "(Counterpunch)

We are showing a trailer. 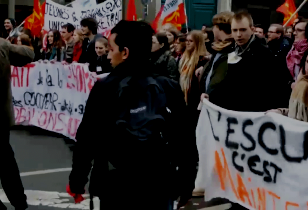 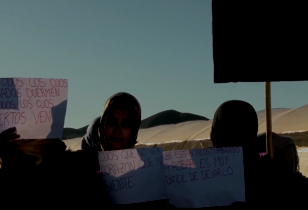 Migrant workers' struggle in a sea of plastic foil