Riders unite: a wave of struggles in the gig economy 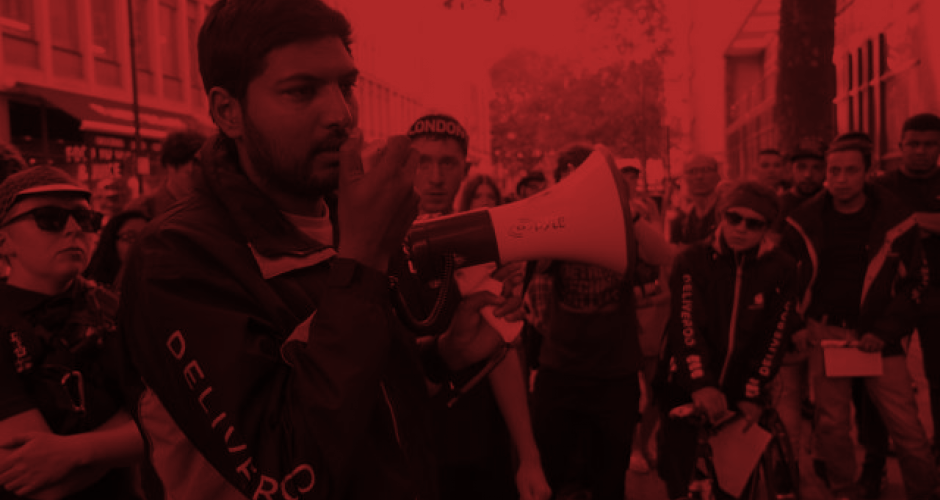 Riders unite: a wave of struggles in the gig economy

We are witnessing increasingly how businesses like Uber, Deliveroo and Amazon Turk are avoiding labour protections and pushing company risks onto the backs of workers through the use of freelance,  “gig economy”, platform and crowd work.

Food delivery couriers working for Deliveroo, Foodora and Uber Eats are at the frontlines of the fight against the spread of precarious work in the gig economy. Over the last two years their campaign for better working conditions has spread internationally across continents.

With irregular hours, a fragmented workforce, high turnover and the threat of dismissal these riders are organising under particularly difficult conditions. But in the face of these challenges they have found new and innovative ways to advance their campaign, through direct actions, petitions, picket lines in front of restaurants as well as wildcat strikes. Some of these actions have achieved significant results.

The Deliveroo organising campaign first exploded in the media in August 2016 when around 200 riders in London began a 7 day long wildcat strike with the support of the independent IWGB union, after it was announced that their pay would be dropped from an hourly rate to a per drop payment system. The strike forced the company to listen to the riders and go back to an hourly pay system plus £1 per drop. This was an example of how self employed riders with no employment protections can force the hand of their employer when they take collective action, and was an inspiration to riders in other cities to follow their example.

We make their profits

After the campaign in London, Deliveroo riders mobilised in Brighton, organising several strikes and diverse actions, including collecting signatures from restaurants to support their campaign “Deliver a living wage”, as seen in the following video. Many of them are organised in the IWGB union, but non-member riders joined the fight as well.

All we want is to be paid fairly

The riders in Brighton were calling for a raise from £4 to £5 per drop, and a freeze on new rider recruitment as there were too few orders. They managed to get a recruitment freeze in February 2017 but their other demands were not fulfilled. In November 2017, they organised a wildcat strike seperately from the union and managed to disrupt the service, preventing deliveries from taking place for several hours. In Bristol and Leeds riders were also organising with the IWW,  and a regular news bulletin called “rebel roo” was started with the solidarity group Plan C.

In Germany, riders from both Deliveroo and Foodora have been struggling for better working conditions since 2016, with actions of over 100 riders taking place in Berlin as part of the Deliverunion campaign with the FAU union. Foodora riders, who are paid by the hour but who still have to pay for all of their equipment,  have organised log-outs and numerous direct actions. In January 2018, they organised a rally in front of Foodora’s parent company Delivery Hero to protest against having to pay for their own repair costs. One day before the demonstration, Foodora announced a new repair plan for their riders: they would receive an extra 25 ct per hour worked. This would translate to 5 ct per km at most, and amounts to a maximum of 42 € per month for full time workers, which is by far not enough to pay for new parts, let alone the costs of actual repairs. The FAU union is demanding 0,35 ct per km, which is seven times more than what Foodora offered.

Some of you could throw your whole bicycle onto this pile: They are so worn down.

In 2018 Deliveroo riders in Berlin started a petition with four demands:

They managed to get more than 150 riders' signatures and in April 2017, they delivered the petition to the Deliveroo office… in a pizza box! Management ignored the demands and simply sent an email to all riders, inviting them to express their concerns in an individual basis, refusing to listen to what they called “third parties”. The day after the petition was delivered, security guards were added to the office doors to “increase the security [riders] deserve” (as was worded in their email). To protest against this, riders organised a “log-out” in a central Berlin zone at the end of April, which managed to disturb the service. They have created a blog to announce further log-outs.

On an international level, apart from strikes and actions, riders have also tried to challenge the legality of their working conditions by taking the company to court, particularly in cases where riders were fired because of their organising activities. In Bologna, at the first national assembly of organised riders in Italy, riders received with dismay the decision of the court in Turin which ruled that Foodora riders are to be considered self-employed.

It's clear that the juridical path is not the only one. The proof is this assembly.

However, attempts to challenge delivery companies in the courts have proved successful in some cases. In Belgium, in March 2018, the Administrative Commission for the Governance of the Employment Relationship decided that Deliveroo riders qualify as employees under Belgian Law. Similarly, in June 2018, the Labour inspectorates of Valencia and Madrid held that workers of Deliveroo and Glovo, another delivery platform, were in a subordinate relationship to the platform company and were therefore to be considered as employees.

Currently, in the UK, a group of riders, backed by the IWGB union, are taking Deliveroo to the High Court in London in an attempt to overturn a ruling by the Central Arbitration Committee which classified the riders as ‘self-employed’. The union has launched a crowdfunder to raise money for the legal fees. At the end of June 2018, 50 Deliveroo riders shared a six figure settlement pay out from Deliveroo, because the company knew they would probably lose the employment tribunal case.

Some dismissed workers have also looked at the possibility of creating their own company to continue working as riders but under fairer working conditions. For example, riders in Spain are on the verge of launching their own cooperative version of the Deliveroo app in Barcelona, and others are looking into using the “coop-cycle” app in Belgium and Germany. These co-owned delivery platforms could offer a meaningful alternative to Foodora, Deliveroo, Uber Eats and co where the profits of the company go to those who are actually “driving” it, and where workers can enjoy better working conditions, safe contracts, sick pay, holidays and above all, respect. Co-ownership wouldn’t just mean sharing the profits, it would also mean workers being democratically involved in the running of the app and having more autonomy over their day to day working lives.

We’ll deliver your orders while ensuring that the rights of riders are respected!

Over the past two years there have been countless actions of gig economy couriers in many cities around the world across Europe to Hong Kong and Sydney. While this transnational movement of organised riders is growing and expanding, it is also becoming more connected and coordinated, with plans to host an international riders “congress” later on this year. Sign up to labournet.tv’s email list to receive more videos on this topic, and other worker organising campaigns.