Why make films about workers' struggles? 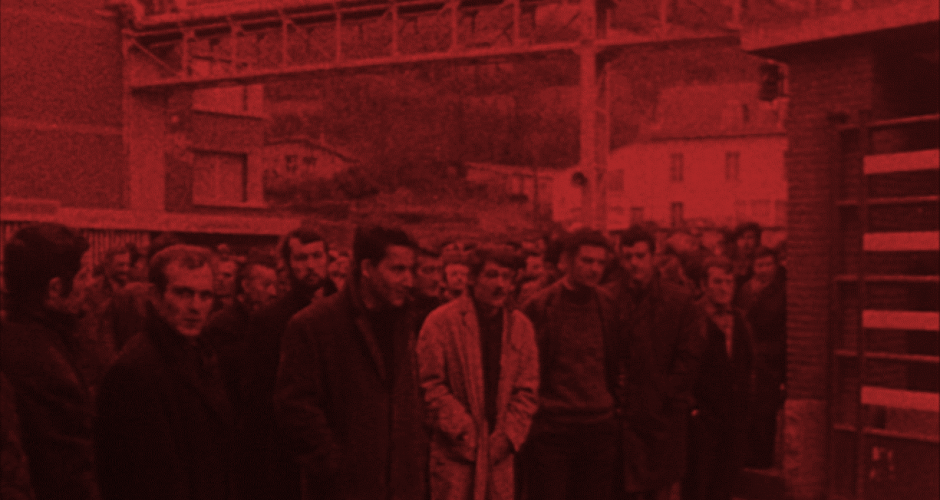 Why make films about workers' struggles?

In Mai 2014, we organized a series of talks and interviews asking the question “Why make films about workers' struggles and the banality of everyday exploitation? “

We wanted to start a discussion on the role of film and videos in portraying / participating in workers’ struggles and particularly on the separation, and possible conflict of interests, between film maker and the workers whose struggle is documented. We were particularly inspired by a project initiated by Chris Marker in France in the 70s: the Medvedkin groups. These were groups of film technicians and factory workers who decided to make documentaries together in order to show the realities of factory life and their struggle against exploitation.

The experience started in 1967, as Chris Marker and Mario Marret went to the Rhodiaceta factory in Besançon to film the struggle of the workers who went on strike and occupied their workplace. This gave us the documentary "A bientot j'espère" (“Be seeing you”) in which the strikers tell us about their everyday life, their struggle, and their demands. Heralding the spirit of Mai 68, they did not only criticize their working conditions but also put into question the very life that was imposed on them.

“For us, culture is a struggle, a demand. Just as the right to have bread and lodgings, we demand an access to culture.”

However, when the directors organized a pre-screening of the documentary in the factory to hear the opinion of the workers, the film was partly criticized for not showing important aspects of their everyday experience. This led to the creation in Besancon of the first Medvedkin group, in which the films were to be made by the workers themselves: the filmmakers would only help the workers with the technical aspects and teach them the basics of film-making while letting them take all decisions regarding the content and the aim of the films.

The first film of this group, “Classe de lutte” (available here on vimeo without subtitles), followed the life of Suzanne Zedet, a worker and union activist at a nearby watch factory. She had to struggle not only against the factory management but also against the reluctances of her husband who felt “almost obliged” to prevent her to be active in the union. Indeed, not only did she have to work in a factory where women workers were the majority – and union involvement taboo -  but as a wife and mother, she was being ascribed a whole set of reproductive activities that left her little time for political involvement. The film starts with images of workers editing and developing the film under a banner that states: “Cinema is not magic; it is a technique and a science, a technique born from science and put in service of a will: the will of workers to liberate themselves.”

However, after a series of shorter films called “Les nouvelles sociétés” (“the new societies”), the Medvedkin experience was put to an end in Besancon, partly due to pressures from the union leaders who did not appreciate this rather unorthodox way of being politically active, as Bruno Muel, a film maker who participated in the project, recalls in an interview we made with him in April 2015. In this interview he summarizes the history of the project and describes the creation of the second Medvedkin group in Sochaux, of which he was one of the main initiators.

“The leaders of the party and the union did not like it. They summoned them and told them to stop their whole acting now!”

The Medvedkin Groups: from Sochaux to Besançon / 15 min / more >>

In 1968, Pol Cebe, a Rodiaceta worker central to the Medvedkine group, moved to Sochaux. With Bruno Muel and young workers from Peugeot, they set up the second Medvedkin group. While the older workers of Besancon used film-making to document their strikes and follow the exemplary lives of union activists, the films made by the young workers of Sochaux were more lighthearted if not less subversive : using a style close to the Commedia del'Arte, they replayed scenes they themselves had to experience at the Peugeot factory and in their worker's homes, insisting on the discrepancy between what was promised to them as they accepted the job and the reality of their lives as workers.  Probably the best document of this collective experience is the short film: “Les trois-quarts de la vie” (3/4 of life) they made in 1971.

“In the factory we work on the assembly line. At home we have to queue up to eat.”

In the 1970s, repression within the factory got harder and harder. The rhythm of the assembly line was increasing, lives and dreams were being crushed under the pressures of productivity. The last film of the Medvedkin Group of Sochaux, “Avec le sang des autres”, “With the blood of others”, started by the collective, had to be finished alone by the film maker Bruno Muel, as the workers slowly lost the energy and incentive to make films in such a context. Still, this important document manages to describe what, beyond strikes and actions, is rarely portrayed: the (terrifying) banality of everyday exploitation.

“And all of a sudden you come and ask what socialism is? What are we waiting for? We don't even know any more”

Now, what can we learn from the whole Medvedkin experiences? And why make films about worker’s struggles nowadays? Indeed, the recent crisis has provoked a new wave of struggles that have been widely documented, thanks to the availability of relatively cheap cameras, camcorders and smartphones. Several video collectives are particularly trying to document workers' struggles and are confronting some of the problems that were raised in the 70s: the interdiction of cameras in workplaces, the repression faced by workers when they accept to speak about their working conditions, but also the dangers of misrepresentation and recuperation. What is more, if the “democratization” of cameras has been essential in narrowing the gap between film makers and workers, and social media could theoretically allow workers to spread the news around their struggles without union representatives or even exterior activists, struggles at the workplace are still far from getting to the front pages, let alone bringing much solidarity.

In Mai 2014, we decided to interview several video collectives from different countries ( Diakoptes in Greece, Mosireen in Egypt, Reelnews in England and Laborbeat in USA) about why they were making videos about workers' struggles and asked them these questions:

“We try to use video as a political weapon”

“Cinema in the Hands of the People”: Chris Marker, the Medvedkin Group, and the Potential of Militant Film