The 2016 movement against the labour law in France 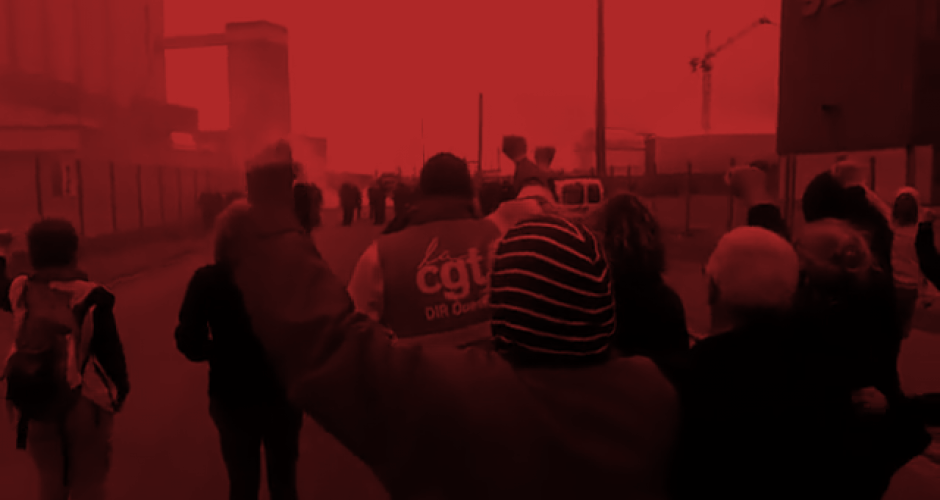 The 2016 movement against the labour law in France

At the beginning of 2016, the chances to see a new social movement emerge in France looked very grim. The country was still under chock after the terrorist attacks of November 2015, and the socialist Government had used this opportunity to impose a State of Emergency and repress any act of resistance. This is also the moment it chose to introduce a major reform in the labour law, attacking many of the restrictions to a total flexibilisation on labour time and weakening the role of the unions by inverting the hierarchy between deals at the local level and at the branch level.
The unions themselves did not react much at first. But resistance was growing from below. First, a petition was launched against the new law, gathering more than 1 million signatures. Then activists started to raise the subject on social media. In particular, a group of YouTube activists started to organise a sort of worker self-inquiry under the hashtag #WeAreWorthMore!, asking people for testimonies about how shitty their working conditions already are ("and now you want to make it worse?")

“Nobody can speak better about your job than you!”

In March, the first big demos were organized, gathering hundreds of thousands on the 9th and on the 24th. But in between, many smaller demos were also organized, in particular by secondary school children (lycéens). On these occasions, police repression was particularly brutal, to a degree barely seen in France in city centers. In particular, a young student got punched by a group of riot cops in front of the Lycée Bergson, and this was caught on video (see the video here https://www.youtube.com/watch?v=rjKrstwUgWY). As the video was shared among them, school-children responded by attacking a police station in the 19e Arrondissement of Paris (see video here : https://www.youtube.com/watch?v=sjqfAm2BWYM). In many ways, these events helped create the radical rejection of the police that characterized the rest of the movement, with slogans like “We all hate the police” becoming widespread far beyond traditional insurrectionist minorities.

"We all hate the police!"

On the 31st of March, under torrential rain, even more people joined the demonstrations, some say even more than a million protesters. But this time, some decided not to go home. They gathered at Place de la République, starting the first real square movement witnessed in France since the 2008 crisis. The Place de la République, who had become a place of memorial since the terrorist attacks of the previous year, became for the following month(s) a place of resistance. People gathered to discuss and exchange ideas, creating working groups, organizing screenings and talks. However, the movement never turned into a full occupation of the square, as the police would systematically clear it every evening, spraying the whole area with tear gas and beating up the demonstrators who would not try to escape.

“Things are starting to move. A new political hope is developing.”

The idea to gather at Place de la République did not emerge first on the 31st of March, it developed during several meetings between activists who came together in the context of the screenings of the film Merci Patron!, a documentary by the director François Ruffin who provoked a great enthusiasm at the time.
Indeed, this documentary about the consequences of the factory closures decided by Bernard Arnault, one of France’s richest bosses, goes further than just showing how these closures destroyed the lives of hundreds of workers. It takes position, and takes practical action: the director suggests to the Klur family, who suffered from this dismissal, to blackmail Bernard Arnault, and together they succeed in forcing one of the most powerful person in France into giving them 30 000 euros - and a job. The film, which could only been seen in small cinemas because of the censorship of the main distribution companies, has been an enormous success, with people queuing to see it in several French cities. Indeed, films about factory closures had been a recurring theme in French cinema since the 2008 crisis (see for example Louise hires a serial killer:
https://de.wikipedia.org/wiki/Louise_Hires_a_Contract_Killer), but this fairy-tale-like documentary, in which the workers finally take the lead and dictate their conditions to the boss, left the viewers with a sense of hope and a desire for action that acted as a boost for the Nuit Debout movement.

“And then we tell him: we give you time until Wednesday. If we do not have a cheque over 30,000 euros by next Wednesday then we will send that to the media.”

After the 31th of March, the movement also found some echo outside the country. On the 9th of April, which was baptized the 40th of March according to the new revolutionary calendar, the first Nuit Debout took place in Berlin. The following weeks, every Saturday, about 100 people came together on Mariannenplatz to discuss about the emergence of a social movement here.  Leipzig und Hamburg also had their Nuit Debout. On the 15th of May, a global Nuit Debout was organized gathering thousands of people in several countries, including Spain and Belgium .

“The aim is to occupy squares and create discussion circles, to begin an exchange between citizens”​

After a few weeks, Nuit Debout had to reflect on its strengths and limits. Indeed, if the movement seemed not to die out, it was confined to a small minority on the squares of the biggest cities, and its relation with the unions was still uneasy. The question of what to do next was a common theme during the assemblies at the Place de la République and at the Bourse du travail (union house), which slowly showed the emergence of a main objective: the convergence of all struggles (“convergence des luttes”), bringing together the organized worker’s movement (in the form of union organized demonstrations) and the square movement at Republique.

“We were so surprised by the success of the 31th of March that we did not think about what was to follow.”

From May onwards, after the law was adopted, the government using Article 49.3 of the Constitution (allowing it to pass a law without a vote of the assembly), this convergence seemed partly to take place, as unions such as CGT and FO properly entered the movement, organizing very effective blockades of refineries, motorways etc. and very large demos across the country. The movement became less centralized and many actions as well as spontaneous demonstrations were organized in numerous cities, big and small. In this second phase of the movement, however, the gatherings at the big squares became rather secondary, only bringing many people during days of big demonstrations, such as the 19th of May, the 26th of May and the 14th of June. During those demonstrations, several hundred thousands of people came to the street, and the clashes with the police were particularly violent, leading to several attempts by the government to forbid them.

"We stay mobilized against the labour law and the world it represents!"

The movement weakend during the summer holiday, with a call to start again in September. The unions planned a "last" (in their own words) demonstration for the 15th of September, to which around 150.000 in 40 cities came. Many actions were organised on that day, including wild demonstations and blockades, such as a blockade of a Amazon depot that lasted several hours. The police was extremely violent during these demonstrations, and an unionist lost one of his eyes as they threw tear gas horizontally into the crowd.

With most unions now stopping their involvement in the struggle (officially wanting to follow the struggle "at the judiciary level", contesting that the new labour law complies with the constitution ), the movement will clearly have difficulties resuming in its current form.  But the frustrations and anger that surfaced during these last months of protests are far to be gone.

It remains to be seen in which form the movement could emerge again, and this last video, made by Medialien, is a great contribution to summarize the strengths and the limits of the movement, and to reflect on its possible outcome in the long run.